Anthrax cycle of infection, amended from Anthrax Guidelines WHO 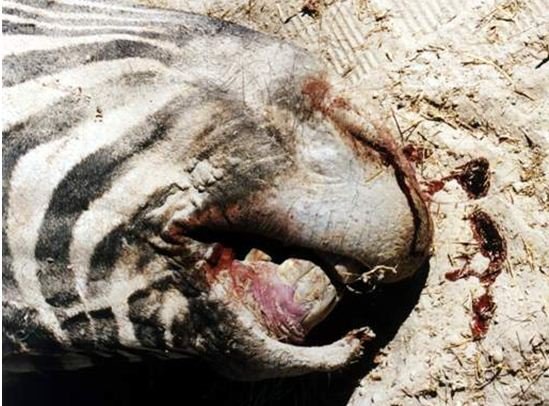 Deceased zebra with signs of Anthrax

Several diseases and incidents like Acidosis, Anthrax, Bloat, Lightning strike, Snakebite and Poisoning can cause sudden death and are described below

It can be both a heart break and financial loss when a farmer suddenly looses one or more of his/her livestock without knowing the reason for the sudden death.

All the below described problems can cause death within a few hours - some of them may be preventable or even immediately treatable. The following gives a brief description of the prevention and treatment where possible as well as links to problems described elsewhere.

This is a direct consequence of animals finding sudden access to unlimited grain and then over eating. Make sure feed bags are out of reach of animals at all times. See under Nutritional problems

Anthrax is a soil-borne bacterial infection of domestic animals, wild animals and human. It is caused by the spore-forming organism Bacillus anthracis.

Hosts: It is most common in wild and domestic herbivores - cattle, sheep, goats, camels, horse, pig, dog, antelopes, zebra - but it also occurs in humans exposed to tissue from infected animals, contaminated animal products, or directly to anthrax spores. It doesn't affect chickens but it is common in ostriches.

Distribution: Anthrax occurs all over the world. It is more common in warm climates as spore formation only occurs when the temperature is between 20@ and 40@C, the humidity is over 60% and the pH is above 6.0.

Under such conditions spore formation occurs rapidly, leading to the contamination of soil and water, where the spore may survive for years; up to 30 years in some cases. Spores are formed in the presence of oxygen. Within a carcass the organisms rapidly die. Only when they are exposed to air and oxygen do they form spores.

The disease is transmitted through pastures which are contaminated by the spores. The animals may be forced during drought to graze on short grass which may be contaminated by the infected soil. Anthrax spores can remain infective in soil for many years. During this time they are a potential source of infection to grazing livestock. Grazing animals may become infected when they ingest sufficient numbers of these spores from the soil.

Depending on the route of infection, host factors, and potentially strain specific factors, anthrax can have several different clinical presentations.

The anthrax bacillus produces a lethal toxin in the animals which causes accumulation of fluid (oedema=swellings) and tissue damage, resulting in death from shock and kidney failure.

In very severe forms, there is a short illness and this makes the disease difficult to treat. The animal develops high fever, difficult breathing followed by convulsion, collapse and death.

In ruminants such as cattle, sheep and goats, the symptoms of anthrax are very sudden and severe, with death occurring within minutes to hours. There is staggering, high fever, rapid breathing, trembling, collapse, and a few convulsive movements, followed by death. Usually the animal is found dead, with bloody discharges from body openings. Rigor mortis is often absent or incomplete, with marked bloating and rapid decomposition. The blood is dark and thickened and fails to clot readily. If by mistake the carcase is opened it will be noticed that the spleen is greatly enlarged and the pulp soft and tarry.

In severe forms, the disease would last about 2 - 3 days before death. The animal will appear depressed, listless and have high fever. The mucus membranes in the eyes and gums are congested and hemorrhagic(showing blood). There is difficulty in breathing caused by edematous (watery) swelling in the throat.

In less severe cases, some animals may survive for 1 week and others will recover. In dogs, humans, horses and pigs, the disease is usually less severe. Sometimes there may be swelling in the lower neck, chest and shoulders, especially in animals such as pigs, camels and horses.

In both severe and less severe cases, affected cows may abort and have a reduction in milk production. The milk will be blood stained or appear yellowish in color. Infection in the alimentary tract may cause dysentery.

In any case of sudden death anthrax must be suspected and a veterinarian informed so that a diagnosis can be made. Bloat, lightning strike, blackquarter, snakebite, and plant poisoning can also cause sudden death.

Blood from nose, mouth or anus is a tell-tale sign of Anthrax. It may be a lot or a few drops. It can also be absent.

The vet will stain a blood smear or smear from a lymph node, abdominal fluid or subcutaneous sweling and examine it under the microscope to give a rapid diagnosis. Only if the result is negative should the post mortem examination proceed. Under the microscope the organism appear as large square ended rods with a pink capsule.

Prevention and control requires a strict adherence to veterinary regulations to prevent and minimize the spread of the disease among livestock and humans.

Anthrax can be a very severe food borne pathogen and must at all means be prevented from entering any food or feed.

Contaminated beddings, premises and feeds should be destroyed or thoroughly disinfected.

Bacillus anthracis is susceptible to antibiotics such as penicillin, streptomycin and tetracyclines and these may be used by a qualified veterinarian either to treat infected animals in the unlikely event that they are seen alive, or to give protection to in-contact animals. This is then followed by vaccination about 7-10 days later.

When the belly of an animal suddenly seems to blow up like a balloon, and the animal has trouble walking - often groans in pain - it is said to have contracted bloat. This happens very often with sudden changes in feed such as at the onset of rains when a lot of fresh new grass is suddenly available. Many animals can bloat at the same time, so when the rains start it is good to have remedies nearby such as cooking oil or detergent such as OMO or similar.

Feeding half a bottle of cooking oil to an adult cow is usually sufficient for it to make a full recovery within half an hour if caught in time. If no cooking oil is available people have also been successful treating with a handful of OMO on a bottle of water.  However if too much time passes and the animal no longer is standing the only hope is to cut a hole in the stomach on the left side where the swelling is at its highest point. For proper instructions please link to nutritional problems.

Also called dysentery is a very serious disease - especially for young animals. If you have the bacteria in your herd it can be the cause of death of all the young animals. See more under Enterotoxemia under Young animal's problems

Poisoning can also cause sudden death. For more information please see under Plant and other poisoning

in sheep is also a quick killer. For more information please see under Worms

Lastly also snake bite can be a cause of sudden death. If the snake is seen and identified, an antivenom can be tried.

If the cause is diagnosed in time people have also had luck with giving electric shocks : Ask a car owner to come quickly with the starter cables, leave the car running while giving a quick shock with the positive and negative ends placed on each side of the bite wound. This works on people as well!