Every person needs food to sustain their lives. The vast majority of staple foods, need cooking before they can be eaten and most people cook 2-3 times per day, every day. The smoke produced during cooking by most stoves in households has harmful effects on the health of the whole family. It is a problem that affects most people. In this chapter, we look at different cooking options available for low income earners. We look at both traditional and modern cooking stoves to help you be safe and save energy.

Introduction and Classification of stoves

Cooking is the most important part in food preparation. It is the point where various ingredients are combined, heat is applied and chemical processes occur leading to a palatable meal. Since the discovery of fire and subsequently cooking, man has been able to increase the quality of nutrition as well as diversified his menu options. This has made cooking and culture synonymous, you can probably tell where a person is from and has been by their cooking.

Cooking over a fire has been done for thousands of years where man developed different cook stove technologies to be suited to the type of food being cooked, to increase types of fuels used as well as improve fuel efficiency. Different classifications for cookstoves exist but the most commonly used method is by fuel source, from this classification we get

With this classification you can go further and group cookstoves under traditional or modern cooking solutions.

The traditional 3 stone open fire can be considered one of the most innovative and durable technologies developed by man that has lasted thousands of years. It is an improvement to the open fire. The reason why it is still in use is its flexibility in fuel options (firewood, farm waste and other biomass can be used) and pan/sufuria sizes. As long as you have access to stones/rocks of the same size, you have yourself a cooking stove. This method of cooking is popular in rural households due to its accessibility. It is a baseline cooking technology that employs no functional considerations for fuel and/or thermal efficiency, thus leads to overharvesting of trees and other fuel resources because considerable heat is lost through the open sides.

Most households that use the 3 stone open fire do so indoors. Due to inefficient burning of biomass, a lot of smoke and soot is released, leading to indoor air pollution. Various scientific studies have linked indoor air pollution especially smoke, soot and other by products of incomplete combustion to increased cases of asthma, poor eyesight and other acute respiratory illnesses (ALRIs) which can lead to death. The World Health Organization estimates that up to 1.6 million women and children die every year from breathing polluted air in their homes. 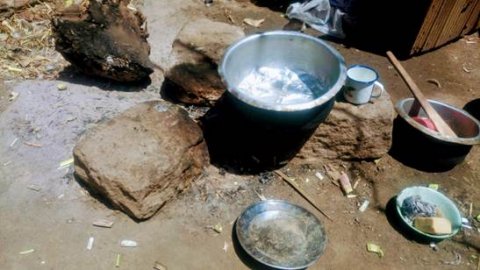 The use of the 3 stone cook stove has been a bane for most poor households, particularly women who are most affected since they are the ones tasked with cooking duties. Here they mostly suffer the health consequences of indoor air pollution. As well, young girls and women spend considerable time looking for scarce fuel and miss out on other life developing opportunities.

In order to reduce the burden of disease caused by indoor air pollution as well as the environmental consequences of over harvesting trees for firewood and charcoal, new cooking technologies are constantly being developed. Some rely on traditional biomass like, charcoal and firewood, while others make use of new fuel sources (fuel gels, liquid petroleum gas etc.). The main goal of most of these technologies is to improve fuel efficiency while delivering good cooking experience. 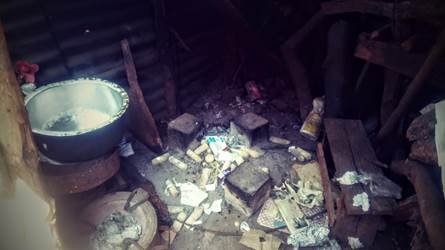 It comes in different sizes and design, the U shaped jiko is considered an improvement on the 3 stone cook stove. It uses significantly less fuel than the 3 stone but is not considered a clean cooking solution due to inefficient burning of fuel releasing smoke, soot and other air pollutants. The U-shaped jiko has been adopted by many rural households due to the ease of construction and relying on readily available raw materials, such as clay soil and cement. Farm waste and other available biomass can be used as fuel. Although still considered a traditional cooking solution i.e. a baseline cooking technologies that employ no functional considerations for fuel and/or thermal efficiency, with improvements in design, it is possible to increase fuel efficiency and reduce emissions. A chimney may be installed to redirect smoke and other emission outside. This makes it a High impact Low Cost innovative development due to its acceptability and accessibility to most rural households. With the right training, households can be transitioned out of using the 3 stone cook stoves, to the more efficient u shaped jiko.

The Nandi community especially those who border the Mau Forest in Njoro constituency have largely developed and adopted this technology without much intervention from outside. To learn more about the construction of the U-shaped jiko you can reach out to Mr. Martin Njoroge (0725 295 437), who will be able to link you to the communities using it. 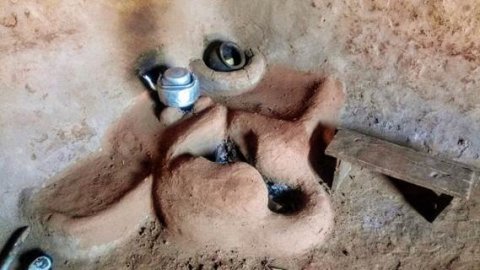 A unique implementation of the U-shape Jiko with 3 cooking surface and 1 fuel inlet. Observe how smoke is channelled to the most extreme cooking surface. Ⓒ Martin Njoroge Kimani 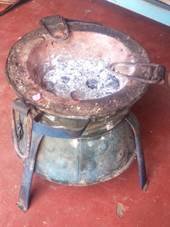 With urbanization and increasing reliance on charcoal, the artisanal metal jikos(AMJ) are a highly relied upon cookstove allowing user the portability to cook wherever while using charcoal. The AMJs which are also referred to as traditional metallic jikos, are popular due to their availability and ease of use. Their availability and pricing is because numerous local / jua kali metalwork artisans are able to fabricate them in large scale with simple metal working tools, keeping down costs while benefiting from economies of scale.

Although the KCJ is placed in the traditional cooking solutions, it fits as both a traditional and modern cooking solution. The main difference between the artisanal metallic and the Kenya ceramic jiko (KCJ) is the clay lining present in the KCJ. The lining creates a significant insulation effect leading to increased fuel efficiency compared to the AMJ (although not enough to be considered a clean cook stove). The KCJ was introduced in Kenya in the early 80's and gained popularity since that has it as the most preferred traditional cookstove in urban and peri-urban households with most households in Kenya and sub-Saharan Africa having some exposure to this technology.

This market dominance can be attributed to the presence of numerous artisans skilled in fabricating the metal jacket while the cladding is manufactured in regions with the right clay and transported en mass to urban centres where they are assembled and sold. The KCJ and AMJ are available from Kes 200 (USD 2) - KES 1000 (USD 10) in most retail outlets in Kenya, from supermarkets, hardware stores and small retail stores. This retail system has proved to be highly efficient especially in replacing damaged lining, leaving the user to buy new cook stove only after the metal jacket is damaged beyond repair. 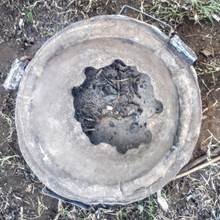 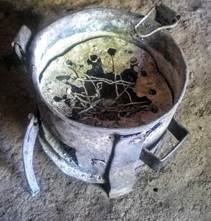 The popularity of the KCJ and high adoption level of the KCJ have created problems related to quality ,majority of the juakali manufactured KCJ have no guaranteed quality standards with some lasting over 2 years while others crack their lining the moment the stove is fired up. This is mainly due to lack of standards regulating the highly informal Jua Kali sector and a general lack of traceability due to the numerous dealers and supplies of the cook stoves.

To solve this problem, some entrepreneurs have setup  formal manufacturing plants which make standardised Kenya Ceramic Jikos, which come with warrantees for upto 1 year. These manufacturers have also developed different variants to the design KCJ principle of using the clay lining to make more versatile in fuel source use. These stoves come branded, the most popular brands come from enterprises such as;

The KCJ is not considered a clean cook stove because it still has significant heat loss from the sidewalls and the emissions from the burning of charcoal cause indoor air pollution.

With rapid urbanisation, increasing scarcity of natural fuel sources such as charcoal and firewood; households are finding it too expensive to rely on most of the traditional cooking solutions. Traditional cooking solutions also lack the modern appeal and with increasing consumer awareness on indoor air pollution, fuel efficiency and prestige, new entrants have carved their niche in the cooking sector.

Wood/ firewood is a commonly used fuel especially by rural household and institutions that require large heating capacity such as schools and processing plants using boilers and kilns. Various technological improvements in woodstoves have allowed them to fit into everyday household use. The three main woodstoves available are.

This is a variant of the AMJ that ruses firewood instead of charcoal. It has the clay lining along the sides to increase insulation and fuel efficiency. 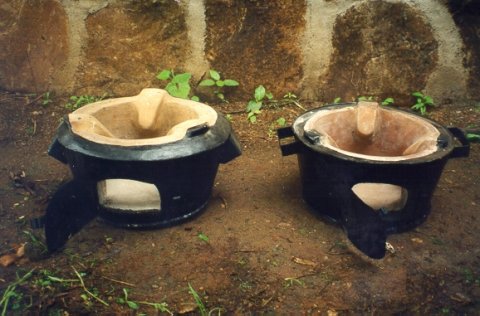 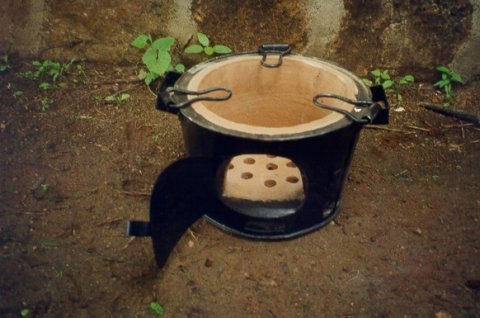 Due to quality issues and the demand for guaranteed performance, some entrepreneurs have started manufacturing and branding fire wood stoves. These have similar designs as with the improved artisanal portable firewood stoves but with the benefit of standardised production systems and traceability in performance not to mention branding. Some of the manufacturers have been able to make clean firewood cook stoves, through improved burning technologies which increase fuel efficiency  and reduce harmful emissions.  Some familiar brand names include Kuni Okoa, Jiko Dura"24cm", Model 2-M2, SmartSaver Wood, SuperSaver wood, Kuni mbili.

To get the branded firewood stoves you  can reach out to the following manufacturers.