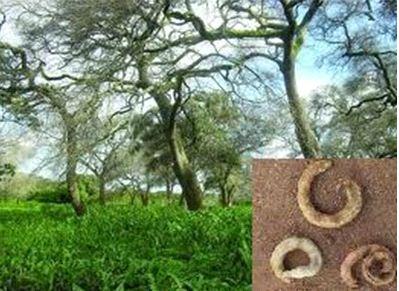 This tree is distributed from the Middle East through eastern Africa and south to South Africa and Namibia. Also west through the Sahel to Gambia and Senegal. In Kenya, it is common in Rift valley along R. Turkwel around Oloitoktok; also in Taveta.

This tree is native to Angola, Botswana, Cameroon, Eritrea, Ethiopia, Israel, Kenya, Lebanon, Lesotho, Mozambique, Namibia, Senegal, Somalia, South Africa, Sudan, Swaziland, Syrian Arab Republic, Tanzania, Uganda, Yemen, Republic of, Zambia and Zimbabwe. The species is commonly used in agroforestry in W. Africa where it's grown widely spaced and intercropped in sorghum and millet. It is deep rooted and its wood is not durable in the ground. Naming of species has been moved between Acacia albida and Faidherbia albida, and the taxonomy is still not clear. Future name changes may occur.

Seedlings and direct sowing at site may be used for propagation. Pruning in the 2nd year to about half the tree height may be needed to control low branching. Repeated pruning during periods of average biomass production stimulates leaf production. It can be pruned twice a year. Resulting re-growth is especially vigorous in the 1st year but decreases as exploitation continues; trees show stress at the end of the 6th year. Regular lopping (once every 3 - 4 years) removing 0.4 - 0.5m3 of foliage (or 35% of the total volume) at the start of the growing season is recommended. However, care should be taken as improper methods of lopping have been observed to cause wounds, predisposing the tree to attack by pathogens. This tree responds well to coppicing.