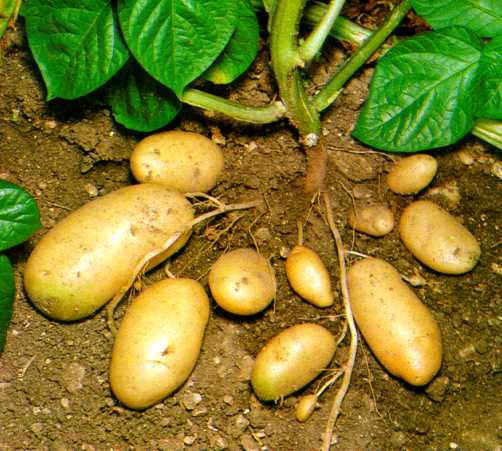 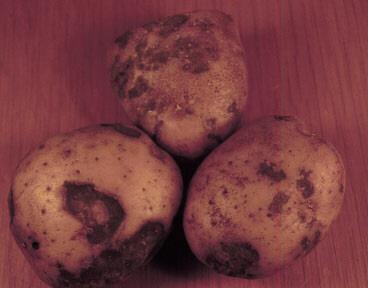 Early blight on potato. On potato tubers, early blight results in surface lesions that appear a little darker than adjacent healthy skin. Lesions are usually slightly sunken, circular or irregular, and vary in size up to 1.9 cm in diameter. There is usually a well defined and sometimes slightly raised margin between healthy and diseased tissue. Internally, the tissue shows a brown to black corky, dry rot, usually not more than 6mm. Deep cracks may form in older lesions. 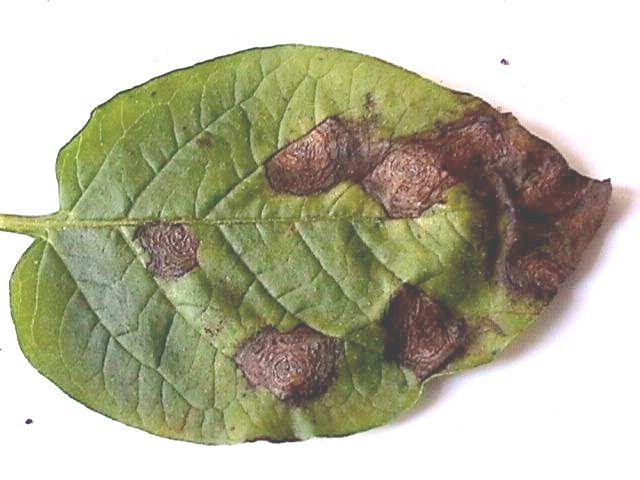 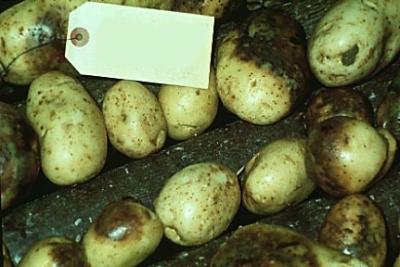 Bacterial wilt of potato - symptoms in the tuber 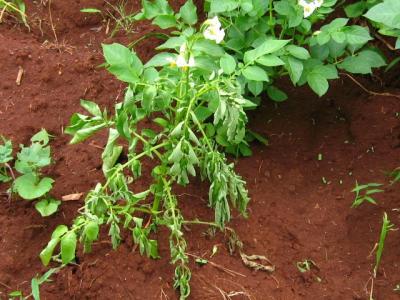 Bacterial wilt symptoms on potato plants. The first visible symptom on foliage is a wilting of the leaves at the ends of the branches during the heat of the day with recovery at night. As the disease develops, a streaky brown discolouration of the stem may be observed on stems 2.5 cm or more above the soil line, and the leaves develop a bronze tint. No yellowing is observed with bacterial wilt ? it?s a sudden death. 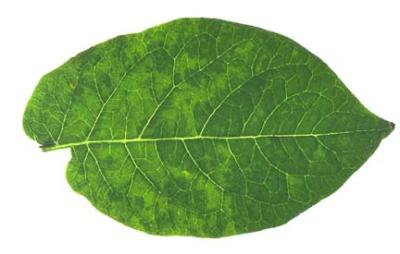 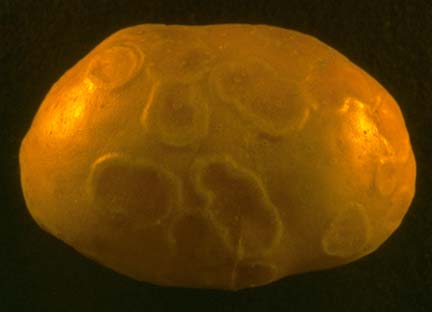 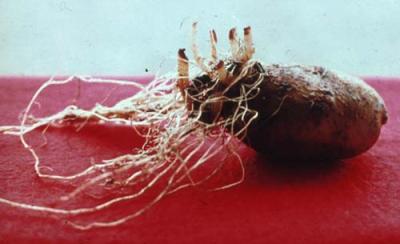 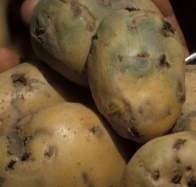 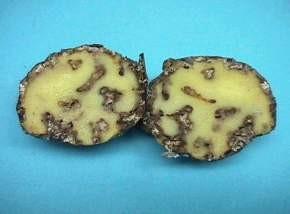 Potato originated in the highlands of South America, where it has been consumed for more than 8000 years. Spanish explorers brought the plant to Europe in the late 16th century as a botanical curiosity. By the 19th century it had spread throughout the continent, providing cheap and abundant food.

Potato arrived in Africa around the turn of the 20th century. British farmers introduced it to East Africa in the 1880s. Potato has grown in importance - both as a staple food and as a source of farmer incomes in medium to high altitudes in Kenya over 30 years.

Nearly all of Kenya's potatoes are consumed locally, at an average rate of almost 25 kg per capita a year. Potato is relished by the rural people who grow them and also by higher-income urban dwellers. In Kenya it is considered a high quality and prestigious food item.

Potato requires well-distributed rainfall of 500 to 750 mm in a growing period of 3 to 4.5 months. Most commercial cultivars of potato tuberise (form tubers) best in cool climates with night temperatures below 20degC. Optimum day temperatures are within the range of 20 to 25degC. Short day lengths (12 to 13 hours) lead to early maturity. In the short day length conditions of the tropics and subtropics, maximum yields can usually be obtained in cool highland areas and in cooler seasons. Cultivation is concentrated in highland areas from 1200 to 3000 m above sea level.In regions with a critical dry season, planting early in the rainy season is best. If the rainy season is long and excessive, time of planting is usually towards the end of the rainy season.

Potato is tolerant to a rather wide variety of soils, except heavy, waterlogged clays. Good drainage is of great importance. Impermeable layers in the soil limit rooting depth and the amount of available water, and so greatly reduce yields. Deep soils with good water retention and aeration give best growth and yields. The most suitable soil pH is between 4.8 and 6. At higher pH, tubers are liable to suffer from scab disease.

Potato is normally propagated vegetatively by small (40 to 100 g) tubers, called 'seed tubers' or 'seed potatoes'. It can also be propagated by pieces of tuber ('seed pieces') or by true seed. The seed rate (tubers) ranges from 1.5 to 4.0 t/ha. The first problem facing growers in developing countries is obtaining supplies of healthy planting material of a suitable cultivar at an acceptable price. Some countries undertake traditional propagation of the seed tubers on sites in the highlands with suitable cool but frost-free climates and where the population of insect vectors of diseases can be kept at an adequately low level.

Recently, the use of true potato seed for propagation has aroused great interest. True seed does not transmit most of the potato diseases, is very light and is easy to transport. Promising methods to grow potatoes from true seed include raising seedlings in a nursery and transplanting them to the field.

Potatoes are planted at a depth of 5 to 15 cm (measured from the top of the tuber). Planting depth is greater under warm, dry conditions than under cool, wet conditions. Shallow plantings should be avoided, because the lower nodes of the stem must remain covered to encourage tuberisation (tuber initiation) and to avoid greening of tubers and tuber moth damage. Earthing up or hilling is carried out to control weeds and to avoid greening of the tubers. Potatoes are normally planted by hand in developing countries, but mechanical planters are available.

Plough-under or incorporate available organic manures in the soil before planting to enhance the water-holding capacity and texture of the soil as well as to provide enough nutrients for a healthy crop. A high yielding potato crop under conventional farming removes 95 to 140 kg N (nitrogen)/ha, 35 kg P (phosphorus)/ha, 125 to 170 kg K (potassium)/ha and has relatively high needs for Mg (magnesium) and Mn (manganese). Organic farmers will need to identify organic sources for similar amounts of nutrients. Potatoes respond well to large amounts of compost or well-rotted animal manures.
Fertiliser recommendations based on soil analysis offer the very best chance of getting the right amount of fertiliser without over or under fertilising. Ask for assistance from the local agriculturist office for soil sampling and soil analysis procedures.

In Kenya certified healthy seed potatoes are available from KALRO Tigoni, ADC Molo and Agrico East Africa among others.

Varieties in Kenya and their characteristics

Adequate control of weeds is required to ensure high yields. In the tropics, manual weeding is generally practised in small-scale production, but herbicides are sometimes used in large-scale production.

Potato responds well to high soil fertility. Manure or compost is needed if the land has been continuously cropped. Well-decomposed animal manure or compost is recommended.
Ridging soon after emergence helps control weeds, prevents greening of developing tubers and prevents spores of late blight fungus from reaching the tubers.

Wide ridges or mounds are required for intercropping. Potatoes can be intercropped with a wide range of annual crops such as sweet potato, maize or even pyrethrum. Potatoes planted in rotation or intercropped with barley, maize, peas, or wheat prevents soil exhaustion. In this case, intercrops are planted at the bottom or at the edge of the furrows and the potatoes on the ridge.

However in order to get full benefit from a potato crop such as high yields, weed suppression and ease of management, without building up high levels of soil-borne diseases: it is recommended to grow potatoes in a separate field and rotate the crop with others. Interplanting with a short season legume such as beans can increase total crop yield and help prevent spread of diseases.

Avoid planting potatoes in the same field for several consecutive seasons. Proper crop rotation enhances soil fertility, increases soil organic matter, conserves soil moisture and helps maintain soil structure. In addition, it avoids build-up of soil-borne pathogens affecting potato, and reduces the level of soil infestation once the soil has been contaminated. Rotations should not include crops that are common hosts for diseases and pests of potatoes (e.g. tomato, eggplant, pepper). Rice, maize and legumes are recommended for crop rotation practices. Planting brassicas such as broccoli, cabbage and mustard plants before the potato crop helps reducing incidence of bacterial wilt and nematodes. Control volunteer potatoes and weeds in the rotation crop.

Time of harvesting of potato varies with cultivar, cultural practices, climate and price. Tubers harvested while still immature tend to have low dry matter content and to suffer more skin damage, resulting in easier infection by fungal and bacterial pathogens. However, seed potatoes are often harvested early, to avoid virus infection that may occur during the latter part of the growing season. Late blight attack may also be a reason for early harvesting.
The harvesting operation involves destroying the aboveground parts (haulm), lifting and collecting the tubers. A general practice to avoid excess mechanical damage to tubers at harvesting is to cut the tops 10 to 14 days before lifting the potatoes to give them time to develop matured and hardened skins. The haulm is destroyed either by manual or mechanical cutting.

In small-scale farming in the tropics, lifting is done manually using simple implements such as sticks, hoes and spades. Mechanical harvesting is carried out only in large-scale farming areas using various types of potato diggers, for example, ploughs, spinners or elevator diggers. Semi-automatic diggers lift the tubers from the soil for hand-picking or collection. Harvesting should not be done during or immediately after rain.

In 2014, the average yield of storage potato tubers throughout the world was about 20 tonnes per hectare (t/ha). Average yields (t/ha) for different continents in 2014 were: Asia (18.8), Africa (13.6), North America (43.7), South America (16.5), Europe (22.1) and Oceania (41.3) (FAOSTAT, 2014). In many tropical and subtropical regions potential yields are much higher than actual yields due to constraints (environmental, seasonal, propagation, crop protection, economic and social) that prevent the full expression of this potential, but individual farmers in Kenya have reported yields up to 35 t/ha.

Harvesting or any other handling to which potato tubers are subjected may cause damage ranging from external injury to internal bruising. After harvesting it is advantageous to allow the tubers to dry in heaps for about 1 to 2 weeks at 10 to 20degC (or in cold store) under high humidity before further handling. During this time the skin hardens, wounds heal, adhering soil dries and disease symptoms become more visible, which facilitates the removal of the infected tubers. Grading should not be started before the curing and hardening have taken place, otherwise further damage occurs. If the hardening has taken place in the soil before harvesting, grading for sale can be done immediately to avoid greening and sprouting.

Before the tubers go into storage, rotten and infected tubers, which may become sources of post-harvest disease infection, should be removed. Potato tubers are usually delivered into stores in bags, baskets or crates. To facilitate handling, containers should not be too large; if they are large they should not be filled completely. Storage of ware potatoes for the market is associated with undesirable quality changes (mainly sprouting, high sugar content, and weight loss due to evaporation and respiration). For short-term storage (1-2 weeks) in the tropics, ware potatoes may be stored at ambient temperatures in the dark, in well-ventilated buildings. Small-scale farmers can keep potatoes in on-farm storage using inexpensive, well-ventilated constructions.

After cold storage, seed potatoes should be pre-sprouted in diffuse light to ensure optimal development of sprouts prior to planting. By storing seed tubers in diffused light at ambient temperatures, excessive sprouting is avoided and seed potatoes can be kept in good physiological condition for a long period of time. If potatoes are stored in bulk without cold storage in the tropics for more than a couple of weeks, they completely loose appeal and will start rotting.

Fresh Quality Specifications for the Market in Kenya