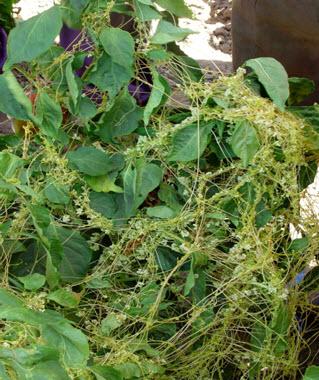 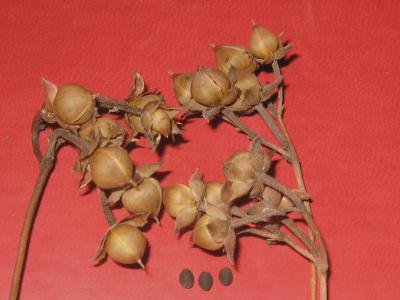 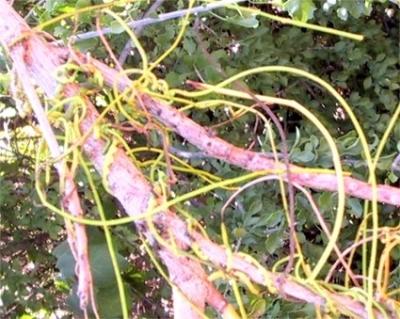 Dodder on a twig of a lime tree 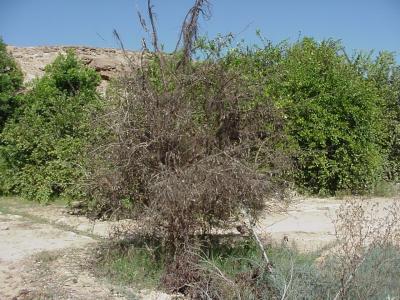 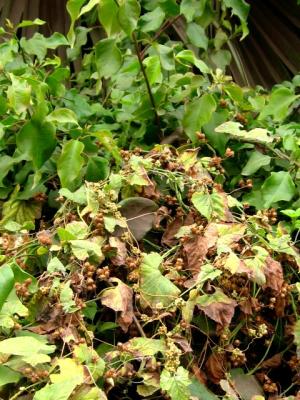 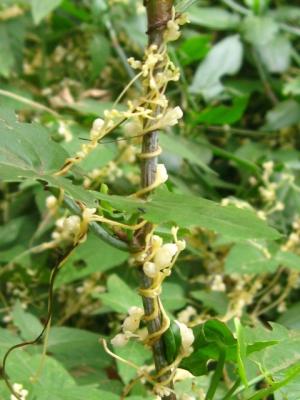 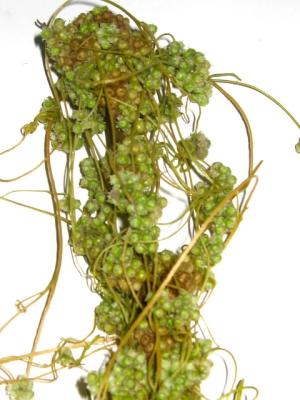 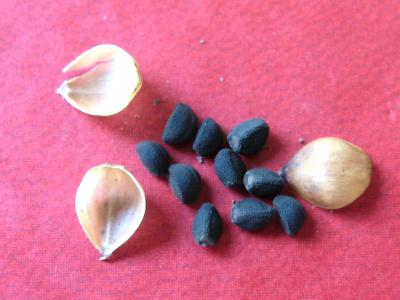 Cuscuta (dodder) is a genus of more than 200 species of obligate aerial parasitic plants in the morning glory family, Convolvulaceae. The genus is found throughout the temperate to tropical regions of the world, with the greatest species diversity in subtropical and tropical regions. Cuscuta species have a very distinct appearance, consisting mainly of leafless, yellow or orange, hairless twining stems and tendrils, bearing minute scales in the place of leaves. It has very low levels of chlorophyll; some species such as Cuscuta reflexa can photosynthesize slightly, while others such as C. campestris are almost totally dependent on the host plants for nutrition. If a dodder plant is allowed to grow unchecked, it will form dense mats in and over the host plant. Dodder plants branch and re-branch, spreading from plant to plant until large areas may be infested. Stem growth of 7.5 cm per day has been recorded. A single dodder plant may spread to a diameter of 3 m or more.
Important dodder species in Africa include C. approximate (alfalfa dodder), C. epithymum (clover dodder), C. campestris (field dodder), C.reflexa (common dodder), C. kilimanjari, C. planiflora, and C. somaliensis.

Dodder derives nutrients by penetrating the stem tissues of the host plant with its haustoria (specially modified root-like growths) and absorbing water, carbohydrates and minerals at the expense of the host plant. As well as "starving" the host plant, dodder is also implicated in the transmission of certain bacterial and virus diseases. It is most troublesome where it is sown as a seed contaminant (e.g. lucerne, clovers, niger seed); where broad-leaved crops are grown as perennials or biennials (e.g. lucerne, clovers, citrus, sugar beet); and in horticulture where most crops in the rotation are broad-leaved (e.g. vegetables, ornamentals). Owing to its powerful metabolic sink effect, the damage to infested hosts can be severe, to the extent of total crop loss. Crop losses have rarely been measured, but there are estimates of 57% reduction in lucerne forage production over a 2-year period, and reductions of up to 40% in root weight and 3.5 to 4 tons of sugar per hectare in infested sugar beet. There is also further economic loss when crop produce, intended for export, is rejected or has to be cleaned expensively.
"Dodder is a true vegetal vampire. With its fine stems it sticks to its victims, then literally sucks the sap until killing the host." (Pamplona-Roger, 2000).
Dodder as a medicinal herb
It is recommended for people suffering from biliary disorder or gall bladder emptying-dysfunction. It can also be used as a poultice for slow healing wounds. Preparation and use of dodder as a medicine are given by Pamplona-Roger (2000).

The presence of Cuscuta is always obvious from the twining stems and tendrils on a host plant. Infested plants show reduced vigour and, in particular, poor seed and fruit development. Leaves of infested plants are yellowed and eventually die. Severely infested plants wilt and die.

Biology and Ecology of Dodder

Dodder flowers occur in white or greenish-yellow clusters. Each flower is capable of producing up to four seeds. Seeds are irregular in shape, rough-surfaced, about 1 mm across. A proportion of the seeds do have a hard coat requiring gradual degradation or scarification, which reduces the danger of all seeds germinating at once in the absence of a host. Seeds can survive in the soil for 5-10 years.
Unlike the root parasites Striga and Orobanche, Cuscuta species do not require a germination stimulant provided by host roots. Dodder seeds sprout at or near the surface of the soil. While dodder germination can occur without a host, it has to reach a green plant quickly; dodder grows toward the smell of nearby plants. If a plant is not reached within 5 to 10 days of germination, the dodder seedling will die. Before a host plant is reached, the dodder, as other plants, relies on food reserves in the embryo. The seedling has only a rudimentary root for anchorage, while the shoot circumnutates, i.e. swings round anti-clockwise about once per hour, until it makes contact with any stem or leaf, round which it will coil before growing on to make further contacts. After a dodder attaches itself to a plant, it wraps itself around it. If the host contains food beneficial to dodder, the dodder produces haustoria (root-like growths) that insert themselves into the vascular system (water and nutrient conducting tissues) of the host. The haustoria have three functions: attachment, penetration of the host stems, and nutrient acquisition from the host. The original root of the dodder in the soil then dies.
The dodder can grow and attach itself to multiple plants. In tropical areas it can grow more or less continuously, and may reach high into the canopy of shrubs and trees; in temperate regions it is an annual plant and is restricted to relatively low vegetation that can be reached by new seedlings each spring.

Dodder seed can be spread by irrigation water, in the manure of livestock that has fed on infested plants along with the seed of dodder and also through movement of contaminated seed of crops e.g. lucerne or onion.

Pest and disease management: General illustration of the concept of Infonet-Biovision

Further below you find concrete preventive and curative methods against Dodder.

Many nations have laws prohibiting import of dodder seed, requiring crop seeds to be free of dodder seed contamination (Phytosanitory regulations). Use of clean crop seed is vital. Seed should be inspected and cleaned if necessary, or obtained from a source known to be reliable. Removal of highly favoured hosts such as Convolvulus arvensis from around field edges is also recommended.

Aim is to control before dodder sets seed by collection and deep burying of infested plants. This may have to be done repeatedly throughout the growing season as dodder seed germinates from the upper 3 cm of the soil. Prevent livestock from grazing infested areas after dodder has set seed, and do not allow livestock that have grazed fields where dodder has set seed to move to other areas.
Hand-pulling is suitable only for scattered infestations as the infested crop plants have to be removed with the parasite. Scattered infestations can also be controlled by heat, using a hand-held flame gun. More extensive infestations in lucerne are also sometimes treated with overall flaming, as the crop is able to recover. Close mowing is an alternative means of control in lucerne and clovers. Rotation with non-susceptible crops can be helpful. Examples of non-host crops include grasses and many other monocotyledons. Cereals are virtually immune, but some broad-leaved crops may also be sufficiently resistant, including soybean, kidney bean, squash, cucumber and cotton. Guar bean (Cyamopsis psoraloides) is not immune, but causes gross deformity and reduces the vigour of the parasite to the extent that it helps to protect a susceptible crop, mungbean (Vigna radiata), when they are grown in mixture. There are no known resistant varieties of susceptible crop species. Deep shade suppresses the coiling and attachment of Cuscuta; hence encouraging a dense crop canopy is a valuable component of any integrated control programme.

Attempts at biological control of Cuscuta spp. have mainly involved the agromyzid fly Melanagromyza cuscutae and the gall-forming weevils Smicronyxspp. Introduction of M. cuscutae, Smicronyx rufivittatus and Smicronyx roridus from Asia into Barbados for control of Cuscuta americana and C. indecora apparently failed, but Smicronyx jungermanniae and Smicronyx tartaricus have given encouraging results in eastern Europe when introduced from one region to another for control of C. campestris.
Among pathogens, Alternaria cuscutacidae is reported to have been used successfully on C. campestris in the former USSR, and a form of Colletotrichum gloeosporioides has been used for many years in China as a mycoherbicide for control of C. chinensis and C. australis on soybean.

Integrated methods involve the all-important use of clean seed; good field hygiene to eradicate scattered infestations before they get out of control; good control of other weeds which might act as reservoirs of infestation; timing of tillage and planting to maximise destruction of parasite seedlings before sowing; and optimum planting arrangement and growing conditions for a good crop canopy to suppress development of the weed.